If you ride by the Marietta home of Marsha and Charlie Crowder on McDaniel Road, you might have to look twice. In the pasture of the estate is a life-like woodcarving of a horse reared on its hind legs. Artist Brian Ruth created the detailed masterpiece from a tree stump. 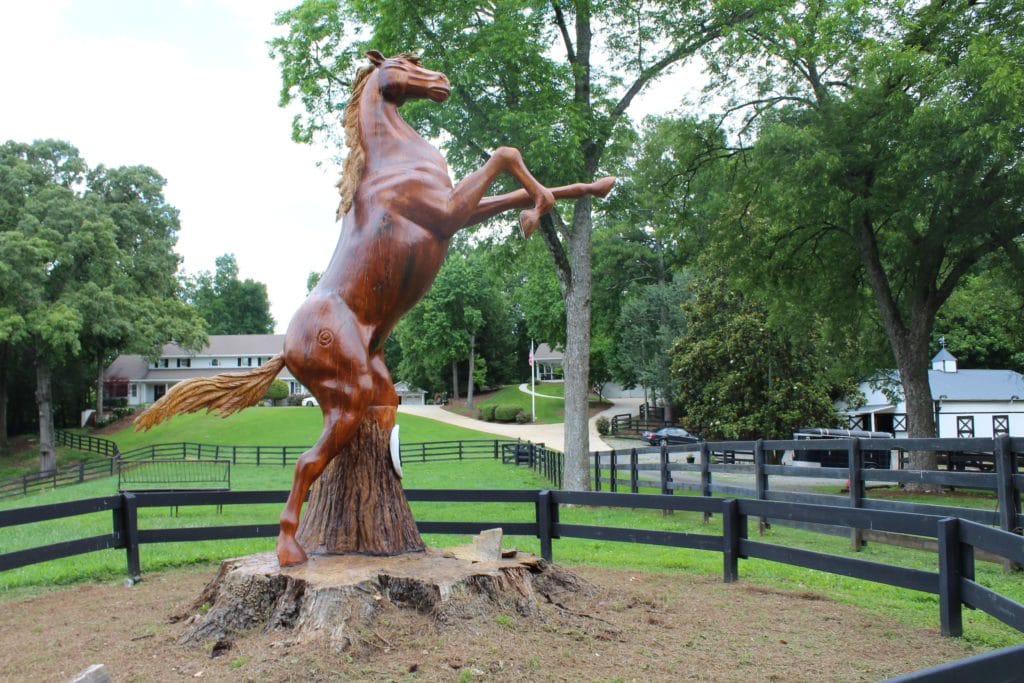 “Brian Ruth is well known to many people because, for years, he has been the chainsaw artist at the North Georgia State Fair (NGSF). He is an artist. He is an artist of eagles, bears, bulldogs, Georgia Tech Yellow Jackets, anything,” said Charlie Crowder, who is on the Board of NGSF.

A large red oak tree stood in the front yard of the family farm that Crowder estimated to be 150 years old. Marsha’s family, the McDaniels, originally owned the property.

“Lightning kept striking that tree over the years. One day I came and it was severed about 25 feet from the air. It was perfectly cut off. The tree fell across my fence and I couldn’t get up my driveway,” Crowder said.

Crowder let the stump sit for several years. “I didn’t cut it down and grind the stump. I had to think about that,” he said. “I almost cut it down a few times and just got rid of it. Thank goodness we didn’t. I wasn’t sure if we could do something or not.”

Three years ago, Crowder visited Ruth at the NGSF and asked him to look at the tree stump. Ruth agreed to carve it.

“(Ruth) is a master. He has 15 different size chainsaws. He literally carved that horse with chainsaws. It’s a work of art,” Crowder said.

While Ruth worked on the piece, Crowder showed him different pictures of famous horses. Crowder said Ruth tapped his head and replied, “I’ve got it.”

The carving took ten days with a few follow up tweakings. “This gigantic tree kept coming down to this weird looking horse until he got the masterpiece with tail and mane. The base of the stump is there. The horse’s legs are coming out of that stump. He carved it all,” Crowder said.

Creating a horse was not easy. “It required scaffolding and climbing on the tree. It was quite a feat,” said Crowder who explained that Ruth usually works with a loose log and maneuvers it.

“(Ruth) is such an artist. He’s done so many things all over the world,” Crowder said.

“When (people) see it and realize that horse is carved out of that tree, you couldn’t pick a better spot for it. It’s like it was meant to be. It can be seen so well by those who drive by it,” Crowder said.

Impacting the community through service

Elizabeth Weaver, Owner and Chef of Elizabeth’s Edibles Personal Chef Services shared a recipe we thought would get ...
Read More →